Rolf’s View of the World and Singapore’s Economy – The whole world has been leveraging up! (Part 3)

This post continues from the previous post - Part 1 & Part 2. In my earlier posts, I wrote about the artificial harvest of the past because of the loose monetary policies. In other words, increased borrowings.  In this article, let us take a look at the global financial system of today, where the advanced economies of the world are leveraging up at a rapid rate.

Monetary system of the past

Since 1971 when the world went off gold standard, it has never been the same.

Imagine you held currencies worth US$35 since 1970. Fast forward more than 40 years today, while the paper US$35 currencies are still the same dollar notes, the purchasing power of the currencies have fallen dramatically.  In retrospect, if you bought 1 ounce of gold in 1970 which cost US$35, the dollar value of that ounce of gold is worth US$1,350 at present time. This is a whopping increase of >38 times.

The answer: inflation due to the rapid increase in currencies worldwide - in particular US dollars which is the reserve currency of the world at present time. Therefore, “savers” have been losers since, due to inflation eroding the purchasing power of the currency we hold. The currencies we hold are no longer backed by the finite gold or silver. Central bankers in US can now print infinite amount of currencies to flood the global economy when they run into deficit.

Ask yourself this question. What will you do when your debt gets too huge? Do you cut spending or borrow more?

To me, it is no brainer that we will cut spending, right!

Nah…this is not what is happening in most developed economies today. We increased borrowings instead. It is insane right!

During Global Financial Crisis (GFC), the sub-prime mortgage debt in US ballooned and collapsed. When a debt gets too huge, according to Ray Dalio's economic principles, there are four ways of deleveraging.

1) Restructure debt 2) Austerity 3) Redistribution of wealth via tax 4) Debt monetization or print money! Read :
What Is The Fuss Over Fed Rate Hike And Its Impact On Us?
Ray Dalio - The Man Behind The Economic Machine!

Quantitative Easing
The first three methods of deleveraging will be extremely painful. Hence, the American Federal Reserve chose the last option which is to increase currency supply via Quantitative Easing (QE). QE is a monetary policy to stimulate the economy when standard monetary policy has become ineffective because of short-term interest rates reach or approach zero. In simple terms, it is no difference from printing money out of thin air to cover borrowings.

During the GFC, QEs were used to acquire assets of longer maturity as well as the distressed mortgage backed securities from US government sponsored Fannie Mae and Freddie Mac, thereby lowering longer-term interest rates. Thanks to QE1 implemented in Nov 2008, just one year after the worst crisis since Depression, business remarkably went back to usual. Subsequently, QE2 took place in Nov 2010, followed by QE3 in Sep 2012.

The source of the problem
Turning back the clock, it all started with the Dot.com bubble burst in year 2001. It got worst with the 9/11 attack and wars in Iraq and Afghanistan. To salvage the situation, Fed Alan Greenspan (in office 1987-2006) loosened monetary policies which later led to the real estate sub-prime crisis. This resulted in the GFC, which Greenspan’s successor Ben Bernanke (in office 2006-2014) not just “received the rotten baton" but deepened the world’s potential financial problems with his series of excessive QEs.

Janet Yellen, the current Fed chairwoman was left behind an enormous public debt problem in US today (~19 trillions) that I reckon there is no way she can turn back, but to continue the artificial support of the world’s economy. It is possible that any major tightening of money supply will possibly lead to collapse of the entire market. When debt becomes so huge, even a less than substantial increase in borrowing rate can bring about significant interest repayments.

Greenspan’s warning
Alan Greenspan, at 90 years of age probably realized his mistakes of the past. Today it seems like he is trying all means to atone his sins. Greenspan became very active speaking about the dangers of the fiat monetary policies eventually leading to inflation. Recently he also discussed the biggest worries in US now is the low productivity growth that will eventually lead to economic stagnation particularly in most developed OECD countries.

"Distorting a currency to achieve stabilization is a loser's game" - Greenspan

Japan had enjoyed the post war growth, boom and eventually collapsed in the early 1990s. Since then, the country's economy had been facing deflationary woes. GDP growth rate in Japan average 0.48% from 1980 to 2016. See below.

To counter the chronic deflation, policymakers in Japan tried to revive the economy via a series of aggressive monetary and fiscal stimuli. Interest rate remains less than 1% since 1994 and has been close to zero since 1999. Today, rate is even in the negative territory. Despite Japanese government’s numerous interventions to "print and spend", it has limited effect in revitalizing the once second largest economy, resulted in what it was commonly known as "lost 2 decades" in Japan.

Perhaps the monetary and fiscal policies fail to address the core problems facing the Japanese economy! Japan has the world's oldest population, very low fertility rate and little immigration. After the crisis in the 90s, willingness in spending is low, and companies are invested overseas rather than domestically. Prime Minister Abe's plan of weakening the Yen did bring about an increase in corporate profits. However domestic spending and wage growth is still low. The monetary and fiscal   "shock-therapy" has little effect in growing the economy. Instead Japan becomes the largest debtor nation in the world with a public debt to GDP ratio of 246%.

Just recently, PM Abe had announce another round, >28 trillions yen ($265b) of stimulus. However its effectiveness remains to be seen. Many suspect if this strategy is to fail, Japan may need more dramatic strategy ahead, such as "helicopter money"!

By and large, Europe has different actors over different countries but story remains very much similar to Japan and USA - “Print the way out of misery!” The latest data in June shows that Inflation is still at zero percent despite all the stimuli European Union (EU) is banking on. Unemployment rate is 10%.

Brexit
The recent Brexit does not bode well for the EU. About half of UK imports come from EU. In particular France and Germany are UK largest trading partners after the U.S. Brexit also further dampened the solidarity in EU.  Already cohesiveness is low because the core economies do not like the idea that they need to support the countries that cannot pay their bills, which includes Greece, Portugal, Spain, Ireland and Cyprus who defaulted resulted in the Euro Debt crisis after the GFC.
Read: Brexit - Rolf's View

Euro Debt Crisis after GFC
Many believed that the Eurozone crisis is a result of globalization of finance and the ease of credit from 2002-2008, which led to the international trade imbalance and real estate bubbles.
Below is the public debt profile in 2012. And yes, Greece defaulted thereafter. 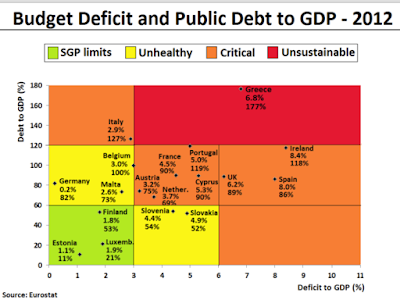 One solution to tackle the crisis is Eurobonds jointly issued by 19 Eurozone countries in Nov 2011. In effect, this is the borrowing of more future money to cover the current debt.  There are mixed reactions. Inevitably, debt-ridden countries are in favour of this solution while those who need to provide support to the free rider object to it. The then Italian Minister of economy Giulio Tremonti calling it the "master solution" to the eurozone debt crisis. Austria, Bulgaria, Finland and the Netherlands objected over eurobond issuance. Bulgarian finance minister Simeon Djankov criticised eurobonds in Austria's Der Standard:

"Cheap credit got us into the current eurozone crisis, it's naive to think it is going to get us out of it."

Italy – The biggest concern
The biggest current concern of the bloc today is banking crisis in Italy. Since 2010, it is reported that the amount of gross NPL in Italy's banks had risen 85% to Eur 360 billions and account for 18% of Italy's total bank loans. 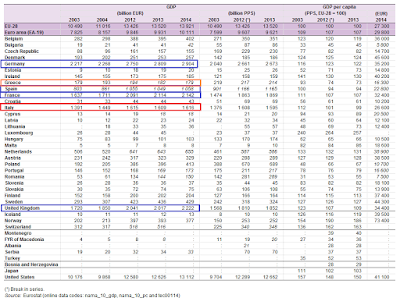 More stimulus
ECB President Mario Draghi had reiterated recently on his willingness to act (or print) to bolster inflation. During a meeting on July 21 this year, ECB announced that its monthly asset purchases of Eur80 billion would run until end-Mar 2017 or beyond, until "a sustained adjustment in the path of inflation consistent with its inflation aim of 2% is achieved. Interest rates will be unchanged for refinancing operations (0%), marginal lending facility (0.25%) and deposit facility (-0.4%).

China had been the main engine to revive the global economy after the treacherous GFC. Many people have no clues that China is also "printing money"!  Let me explains.

China export-led economy in the last decade had provided them with loads of US dollars inflow. The massive US dollars China owned will then be used to fund their foreign investments. However majority of the dollars is used to purchase US Treasuries, earning a meager interest rather than leave it within China earning no interest at all.

With loads of US dollars on hand, China essentially is required to use the Dollars they received to purchase Chinese Yuan in the forex open market. However this will cause the Yuan to appreciate by a great deal relative to the Dollar, which will reduce China’s competitiveness in her exports. Instead, the People Bank of China (PBOC) has been artificially keeping the Yuan exchange rate low by pegging to the US dollar. In simple terms, it means that for every US$ China has, PBOC will print a fix amount of Yuan say 6.5 times in circulation. In fact, last August the PBOC devalued Yuan by close to 2% which rattled the stock markets globally.

While China’s national debt is ~44% of GDP today, her total debt (including household and corporate debt) to GDP ratio is in the range of 240-270%. To many, the total debt figure is still manageable compared to U.S’s figure of over 300 percent. That said, it is not the absolute debt levels that is worrying but the rapid rate of increase that is causing alarm.  A decade ago, China’s total debt to GDP ratio is only approximately 150%.

It is not just US, Japan, Europe, and China that are leveraging up. The rest of the world is following suit, resorting to printing more currencies to inflate the global fiat currency reserves.

Australia central bank just announced to cut rates to fresh record low to counter low inflation and subdued employment figures. Reserve Bank of Australia lowered rate by 25 basis points to 1.5%. Reasons of the rate  slashed is mainly due to slowing growth of China as well as the end of mining boom seen few years ago.

Following its Brexit, Economists are pretty sure that UK policymakers are likely to resort to all sorts of stimulus measures to prevent a painful contraction.

To be continued …
Posted by Rolf Suey