This will be the first of a series of articles ahead where I will present my views of the world and Singapore’s economy.

For readers who are more sensitive, maybe it can be potentially controversial. Why? Well, opinions or predictions can always be controversial especially when people start to get too excited and serious about it. I will appreciate if readers can treat these articles casually and maybe even with a tad of fun. Please do not be overly affected by it. The whole idea of my writing here is to provide a view so that we can think out of the box in an unconventional way.

Who am I to give my views of the world? I am not a great political leader. I am not legendary investor. I do not even have my own business! I am just an employee who scaled corporate ladder. Perhaps my slight edge is the experiences gathered from my traveling to a fair bit of places around the world. It's not plain tourism but the understanding of the countries' cultures via dealings with the locals. Places includes different parts of China, India, Europe, US, Brazil, Middle East, South East Asia (Malaysia, Indonesia, Thailand, Vietnam), Japan, Korea, Australia etc. The one continent I have not been to is Africa, although I do know a few South Africans.

The world of uncertainties today

Today, the world is in a pretty unusual situation with a wide range of uncertainties!  The recent Brexit came somewhat shocking to the world. Donald Trump as President of US today is no longer a myth compares to a year ago as he has officially accepted the Republican party presidential nomination.

In fact, since the start of millennium, we had undergone a series of major disastrous events globally. They are the Dot.com crash, 911 attacks, War in Afghanistan and Iraq, SARs epidemic, Global Financial Crisis, Arab Spring, European Debt Crisis, Oil Crisis and ISIS threat of today.

To top it all, Venezuela is heading towards humanitarian crisis with food and medicinal supplies shortage while North Korea continues to showcase their nuclear tests putting the world into fear.

Read: Venezuela - A Nation of Beauty Queens; Now A Nation of Hungers! Who will have thought this will happened?

Of all places in the world, Singapore is still considered a relative safe country. However lest we forget that being a small city that depends heavily of global trade, we will not be shielded if economic crisis befell on our major trading partners. And being close allies of the western world, we are definitely prone to terror attacks as well.

The start of the 21st century

In order for us to see the future more clearly, we need to understand what exactly happened in the past. As Winston Churchill puts it “The farther back you can look, the farther forward you are likely to see.” So let us revisit what has happened going back into the past.

Dot.com bubble
The initial fear just before the turn of the millennium was the Y2k problem also known as the Millennium bug potentially causing disarray in computer programs. Yet, in reality, the real problem was the euphoria of the Dot.com stock market, which led to the biggest ever tech stock boom and bust.  Nasdaq hit the climax of 5,132.52 on Mar 10, 2000. Just one year before, it was at 1,700-1,800 points and five years earlier it was approximately a fifth of its peak. Many companies were not even having any earnings and yet the market's PE ratio ridiculously topped 100.

9/11 attacks & Wars in Afghanistan & Iraq
The tech bubble burst and many companies folded. This crash of the stock market was worsened by the Al-Qaeda 9/11 twin towers attacks of 2001. Nasdaq index plummeted to below 1,300 on Sep 2002. This will later led to the U.S. President George Bush declaring War in Afghanistan and in Mar 2003, US and her coalition army invaded Iraq on grounds that Saddam Hussein's Iraq had weapons of mass destruction. Saddam Hussein was captured and executed thereupon, but no signs of weapon of mass destruction.

Easy Monetary Policies
The few years of economic distress at the start of the 21st century led to the then US Fed Chairman Alan Greenspan (in office from 1987-2006), to drastically reduced Fed Fund rates several times from a high of 6.5% in May 2000 to a low or 1.0% in Jun 2003. 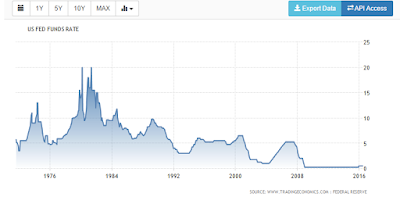 The easy Fed monetary policy provided enormous thrust to the US and the global economy, which inadvertently led to the biggest Real Estate Subprime bubbles that resulted in the 2008/09 Global Financial Crisis (GFC).

Ostensibly, the problems already begun in 1971 when then U.S. President Nixon took the US dollars off the gold standard, leading to the fiat monetary system of today.

Turning the attention to Singapore, the last ten years or so had been an economic fairy tale for Singapore. Don't believe?

Stellar GDP Growth
You just have to look at our GDP figures as follows: 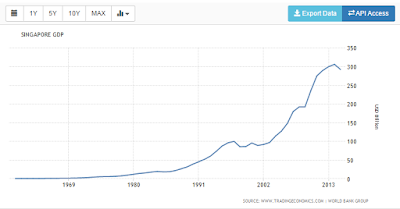 Easy monetary policy
Since the SARs crisis in 2003, Singapore's economy grew at an increasing rate. Being an open economy we were obvious beneficiaries of easy global monetary policies.  If you refer to the below chart, you can see the incredible rise of Money supply in Singapore over the last two to three decades. In the next chart, you can also see that average overnight interest rate had fallen to near zero after the financial crisis. 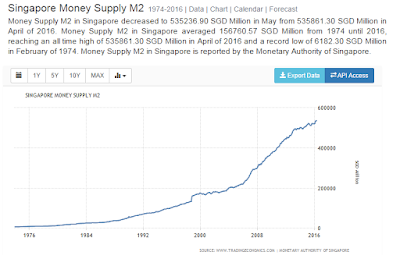 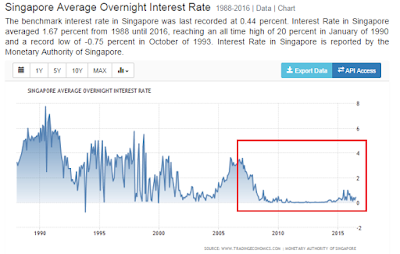 
Loose immigration policy
In the face of a booming economy and facing labour shortage, Singapore government loosened immigration policy. This led to an influx of supposedly cheaper foreign labour to supplement the shortfall. Below is a table extracted from singstat.gov.sg to show the key demographics of Singapore from year 1970 to 2015.

From 2004 (after SARs crisis) to 2008, businesses prosper and rich becomes richer! Salaried middle class workers did well too in nominal terms. The lower class though, as it always is, lagged behind the leading pack and becomes worst off as the economy inflated in prices.

Expectations of salary were barely in checked. Almost everyone think that they were underpaid due to the rising median income and of course, the rising cost of living too. Most wanted to assume managerial posts with higher than respectable salary. Yes, even those who had only freshly entered the workforce for a few years were having extremely high expectations.

Did productivity really increase at a faster rate?
In reality, capabilities and work experiences lag behind salary increase. Yes, productivity increased but arguably in my opinion at a much slower rate compare to the eruptive growth of the economy caused by leverage of easy money and the influx of foreign labour.

Economic progress seems all-important for the high-handed ruling party in their quest to become a world class country of economic success. The intangible social impact was neglected leading to PAP narrowest victory over the opposition since independence in the 2011 Singapore general election.
The country was enjoying one of our best economic success leading up to the GFC.

Worst crisis since WW2, but the party resumed shortly after

A mere seven years ago in 2008/9, we had just encountered the worst financial crisis since WW2. Some compare the GFC with Great Depression in 1930s and the Japanese real estate bust in the 1990/91. The main difference comparing with the Japan crisis was that back then, the crisis was limited to a single country. In retrospect, the GFC is global in scale due to the interconnectivity of the world today, as well as qualitative more severe.

Yet, barely a year after the collapse of Lehman's brothers, financial market stabilized, stock market rebounded and economy recovered. It's back to business as usual.

While the historical Great Depression and Japan real estate and stock market busts lasted for decade long, the adverse impact of GFC was short lived, thanks to the artificial support that Central bankers introduced by dishing out a series of QE globally.

Refer to the chart below which shows the massive monetary base growth after the GFC.

Hence, the six to seven years of post GFC period had been an astoundingly and unusually successful one.

In the main, it was China driving the world economy, constructing new apartments, roads, railways, irrigation, sewage systems, commercial centers etc largely driven by State-owned Enterprise (SOE). And this was of course fuelled by the cascade of debts pouring out from the central bank. In particular, the ballooning shadow banking which is the unregulated credit in nonbank entities within the country has been a specter!

Stock market today is still at relatively high levels. This is not just comparing to period of GFC but even when reference to pre-crisis peak.

Markets in Asia and Australia were slightly more modestly priced today due to the worries of China engine running out of steam having more than significant impact to regions here. This is especially after Black Monday in August 2015 when China surprised the world with the devaluation of their yuan.