Have you ever wondered that longevity or illnesses of a person has close association to one’s character and how he/she behaves or what they do?

If we become are too uptight or nitty-gritty over even the slightest things in life, and cannot relax, we can be prone to sickness unknowingly. It can be a sickness so serious that the doctors or ourself will find it hard to know why. This is when we will start examining on the things we eat, our exercise activity that frankly none is the real cause. 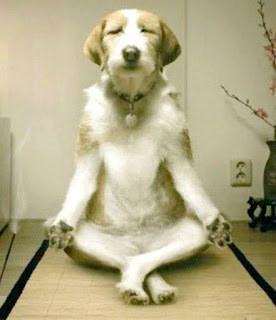 Here is a list of several reasons why you cannot relax: Career issues; relationship problems; eagerness to be successful; impatient; the character of extreme non-procrastination and most commonly the chase of wealth. As for chasing money, this not just applies to the poor, but also the rich who have over-emphasis one the importance of wealth. Remember:

“Love of money is the root of all evil”

An ex-colleague of mine said this on one of my ex-VP (both Europeans), who is always so uptight. “Even he is lying on the beach in Hawaii, he also never relax!”

Apparently this ex-VP of mine then had a brain stroke in his 40s after him overworked himself after transferring to Singapore office. It happened one day, when he woke up cannot even remember his name, his wife nor his children. God bless and after several months of rest, he recovered!

My own illness experience

For more than a decade, I was unsettled by intestinal problems. The pain is so severe that I will end up crouching and holding back my scream until I turn pale eventually. Not surprisingly, I was hospitalized countless times even during a Norway business trip. And yes, even have a brush with death. Thereafter, I was put on expensive medication for years. Even my doctor who is one of the best intestinal specialists in town is unable to diagnose the source of my illness till date.

Yet, without any medicinal help, my intestinal pain had miraculously recovered gradually over the recent years. I am extremely grateful.

Looking back, I kind of attribute my illness to my over-zealous work attitude in the past. Furthermore, I tend to take things too hard back then. I was the classic non-procrastinator who always wanted to get things done immediately. And if it is not done within my plan or schedule, I will be edgy and mad.

An ex-colleague who was ten years my senior in age, told me lately that he used to be quite afraid of me because I am fierce and overly competitive especially in work. In contrast, he had seen noticeably change in me in recent times. The same feedback was from people close to me.

I am less emotionally affected nowadays, especially in certain things that I deem relatively immaterial in my life to get worked up over.

Perhaps we need to be more open minded, more inner peace leading to more self-control, to have more experiences, and more wisdom leading to better decision-making in life. Perhaps we should be seeking for “Enlightenment in life!” Mediation definitely plays a big role too.

Recently I finished reading Teh Hooi Ling’s “Show Me the Money Book 3”.

She highlighted the close and distinct link between a person’s longevity and the things they do. Teh mentioned that Value investors live much longer than average person. One of the reasons is because they are not so emotionally affected and sleep better at night. Also they are not so highly strung and has a stress level lower than those who chase after the market and whose mood swings along with it.

Evidently, Benjamin Graham, Warren Buffett’s mentor died at age 82 in 1976 which is considered a good long life back then. Another of Graham’s disciple is Irving Kahn who died last year at age 109. Then you have John Templeton who passed away at age 95, Philip Fisher age 96 and Philip Carret age 101. Warren Buffett and Charlie Munger, currently 85 and 92 years of age respectively are still very active in today’s world of investment.

An extremely common trait you can find in people with longevity is that they are very active mentally despite the old age. In fact, I believe many old people who have Alzheimer after retirement is because of the lack of “interesting things” in life that they are passionate over it. And this is important to keep their mind active to ward of Alzheimer illness.

For value investors, picking stocks that can beat the market is quite a brain training as well.

Real life examples
One of my two ex-bosses, Mr. C who retired a year ago, appeared haggard lately.  Strangely, he who has all the money in the world, plus a complete family with kids all grown up successfully in work, does not seem to me as very happy in a recent meet up. He did not say it, but I do sense it.

I remembered when we were working together many years ago, Mr. C was always glowing with energy and so work-driven.  He was decisive, and blessed with a mind crystal clear and photographic memory. Overall, he is also compassionate, packed with wisdom and a very well respected mentor for me.

While he may not be as rich in the past compares to today, I sense that the satisfaction Mr. C derived from work back then is far more important than the current EXCESS TIME & MONEY he had today!

This is the harsh reality check for many people who merely looked forward to financial freedom and retirement, and yet is totally unprepared or unaware what they want to do eventually when the big day arrived. Even the wisest and wealthiest Mr. C I respected so much, may have fallen into this trap, let alone many other people.

In contrast, my other boss Mr. Y, who is older in age, is healthy and looking really good recently. He told me he is even busier today than he used to be in the company managing a business of hundreds of millions. This is because he has found the true purpose in his life. Using his abundance of knowledge, experiences in life and wisdom to educate, help and spread the love to people around him not just in within Singapore, but outside the country as well.

Finding the purpose in life

As Teh HL rightly put it “Longevity stems from the love of life in general.” This is of course excluding scientific reason such as genes or reasons of accident causing death.

“rich or poor, I think that to survive to a ripe in an old age, people must have something that keeps them going. It can be a cause of champion, the pursuit of a life-long passion or that they see a grander purpose in their lives.”

Referring to the magazine The Economist, Teh specifically mentioned her favorite is the obituary column that typically profiled people who achieved a great deal by making the world a better place. Taking 50 past issues of the column, she discovered an interesting fact as shown in the table below about the age of certain group of people. 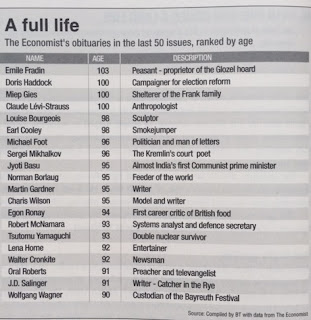 So the group that has the greatest longevity is Curator (or keeper of a cultural heritage institution e.g., gallery, museum, library or archive). Next is activist such as Doris Haddock who walked 3,200 miles to campaign for US electoral reforms and Miep Gies who sheltered for Anne Frank’s family. All lived at least a century of age.

Scientist is the next biggest group with median age of 95. People using words in their profession, such as artists and those in military and religion lived above 90.

At the other end is the group after pop art star such as Michael Jackson, is the group that engaged in outdoor activities such as climber John Bachar, crocodile savior John Thorbjarnrson. Politicians also have one of the shortest median lifespan. Refer to table below. 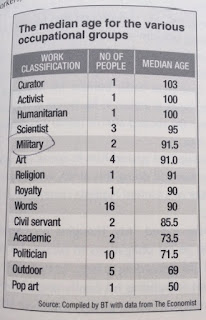 Teh HL ‘s conclusion for longevity is as follows which I agreed fully.

Is a well-planned retirement definitely a meaningful one when the "big" day arrived?
Rolf’s One-Third Rule in Life, Work and Investments
Is Work Life Balance Only For the Financially Freed?
What is Your First Priority? - Liam Neeson, Taken 3
Legacy of Values & Meaning of Life - Dr Catherine Lim

Rolf’s Matrix Series:
Are we living in a Matrix? (Part 1)
Finding the source of the Matrix - The true purpose of life (Part 2)
Matrix Revolution – Seeking Enlightenment! (Part 3 - Final)