This is the article that I confess my lavishness, spending hundreds of thousands of my hard earned money on car in the last 12 years. I owned four cars during this period. The first and second were owned for two years each and they were second-hand Japanese cars. In the last eight years, I was driving continental brand new continental cars, the earlier one for three years and the most recent one for five years.

Earlier this week, I bid farewell the car I owned for the longest. Yes also the most posh and most expensive one. My wife is getting emotional as this is the car where my family has many fond memories with. It also carries a sentimental car plate number for my wife and me. And of course it is remarkably good car! It is a BMW 5. Nope not Bus, MRT, Walk.. but a brand new 5 series comes with V6 engine which I had drove for five years “flushing” petrol and money.

This article is definitely not my intention to brag about the car. Yet, I just want to share my feelings now compared to five years ago. I think I have grown wiser since then!

First and foremost, it is a sedan car. My family is getting bigger and a 7-seater is almost inevitable for us. Next, the amount of money drained per year is quite ridiculous. Since my job requires me to see clients, letting them see that you are driving big posh car is also not so appropriate. This is also why for many years I try not to let customers see my car, and not talk about the topic of cars.

Another important factor is the “car image” thingy no longer appeal to me. A colleague said, this is because I had driven BMW now for many years already. I told him it is not true. Otherwise I would have wanted a better car each time. For instance, the moment I got a posh car, I will get tired of it after a short time and already start thinking about the next more posh car. This mindset will be never ending!

Nowadays I just want a car spacious enough for my family to fetch us from one point to another SAFELY. Of course the impending downturn plays a part in the selling also. This is why I already put up ad on selling the car since last year. Unfortunately it is the buyer’s market and I only got it sold until now.

In the past, I was ignorant and will keep upgrading my car when I had a pay rise or promotion. Or even when my “backside” started to gets itchy?

Ok, I was young once. Not just young, but also quite arrogant more than five years ago, since I am climbing fast in the corporate ladder and did earn some good money. Stupidly, I thought then, the car must match my status in work. Frankly, it is not necessary! Somehow the men’s ego infiltrates my mind back then and I am glad I realize today, it is no longer important to me!

Another reason why I bought the last two BMWs, the first being a 3 series is partly under the influence of my close friend of mine. Nope, do not be mistaken, not peer pressure. Instead one of the reasons was helping a friend hitting sales target, because he was the sales manager in PML then. In fact my first car was also purchase from another friend whose family is in car dealer business.

Ok, I am not a bleeding heart solely to help my friends. In return, my friends did give me unbelievably fantastic deals. In fact my brand new PML 3 was a “mere” 115k back then with many goodies bundled to it. Pardon me for using the word “mere”. I know I know I know…car in Singapore is bloody expensive. My intention is just to compare that in today’s car market, you can only get a modest type of car with the same amount paid.

Lastly, all my cars were required for my work as I received allowance for them. This alleviates some pain in the repaying of my installment.

Well… if you ask me now, would I buy such an expensive car again if I were to relive my last 8 years? Hmmm…maybe not the 5 but just the 3 which is seriously already extremely good! All I can say is I probably will not spend so much wasteful money anymore.

Then again, I never regretted owning all my four cars as I enjoyed each and every moment in the time in these cars. And perhaps a good thing for my wife to brag is since she passed her license, she had never drives a car other than BMW!

One thing I must proudly proclaim or to advise is I have never allowed myself to fall into the trap of financial difficulty or having the need to slash other areas of my expenditure due to the ownership of cars! And this is an important criteria when you are considering buying a car.

The "so call" luxury

In retrospect, the buyer of my 5 series recently is a 25-26 year old, who used her mother’s income slip to apply for the car loan. The loan applied was more than 75% of the car price. Woohoo….

What is more remarkably is neither the age of the buyer, nor the high loan. It is how his mother’s loan application was REJECTED by every banks when the dealer (who is my friend), submitted all the required documents including income slip, credit history etc. The son pledged to be the guarantor, but it does not help either! The son mentioned that he had to use his mother’s name to borrow the money, because his revoked license was just lifted, and he might be slapped with exorbitantly high insurance premium. Not really a good reason for a young chap who was already driving a used Lexus. Eventually the loan was approved by a private financer at >4% interest!

Initially it was close to 5%, and he vents his anger on us without any fault of us. He then asked if I will ever accept such ridiculous interest rate. Deep down, my answer is, I am sure my loan application will have approved by the reputable bank rather than private financing company. Read:
My Credit Report from CBS

And yes, he was wearing a shiny all-gold Rolex reflecting piercing light into my eyes when viewing my car.

I was also quite shocked by how fast the son decided to pay the deposit after he seen the car, without even researching on all details of the car etc. It was perhaps love at first sight and that is all important. It is only after he paid the deposit, that he started asking me all these important details. And yes, even after taking over the car, he still probed me on various details of the car, which most buyers should have already checked prior to buying.

The whole sale was not as smooth, nonetheless it was through! Now I feel lighter on my shoulders and sort of back to basic. I am renting a simple car for now to suit my working needs. I had already driven two different loaned cars now, and I must say I did kind of miss the drive and comfort of my old car. But no regrets. For now, I will take my time to look for my next vehicle, but hopefully I can get a company car which will solve my problems once and for all.

My daughter asked : Papa why you need to change car, I like the car leh!  Duh! 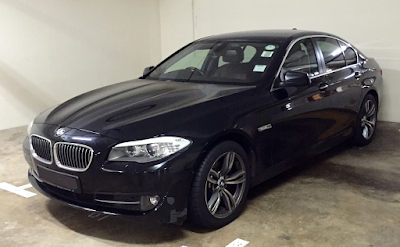