Crisis? We should be happy because it is the best time to learn!

First of all Happy CNY to all the readers! May this Golden Monkey jumpstart your year with loads of Joy, Happiness and Prosperity!

Is 2016 or the Monkey year doing great so far? Not quite! 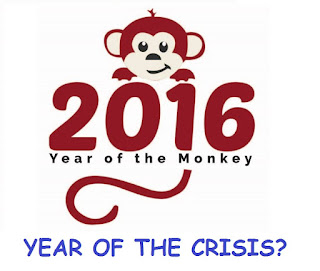 2016 started on a bad note. Global stock markets plunged due to oil price rout and China’s economic slowdown. ISIS problem proliferated with Jakarta bombing last month. North Korea recent rocket launch put further strain to US-China relations. Taiwan’s opposition presidential victory also does not seem to do any good to improve the cross strait relations. In Hong Kong, a riot broke out during Lunar new year between civilians and police, which many believed it is more than just a fight over unlicensed fishball stalls, but an activist’s fight of autonomy from Beijing's control. Then there is Taiwan’s building collapse due to earthquake, and just yesterday, two passenger trains collided in Germany.

Apparently, it seems like we are already entering into a crisis in 2016. So should we fret and fume over it? Perhaps not! Crisis is the best time to learn! In fact, I am thankful to be able to go through many crises in my life, and each time emerged stronger than before. Crisis in mandarin is referred to as 危 (wei) 机 (ji). When “危(wei)” and “机(ji)” are read together as one word, it means CRISIS. Separately 危 (wei) means danger while, 机(ji) means opportunity. Therefore if we are positive, and can see the other side of things, opportunities can emerge from crisis!  In the following, I will discuss some of the crises in my life and what I had learnt from them.

Since the start of the year, STI has plunged below 2600, nothing seen since the financial crisis of 2009. Should we worry or should we buy? Personally, I picked up many bargains and made more than ten of trades deploying a fair share of my cash warchest! I view the current sell down as a buying opportunity, considering that I had been very patient and relatively dormant in the last 4-5 months. While I am buying sparingly, I am prudent and still keeping more than 50% of cash to take advantage of further plunge, if it does happen. I think I am on the right track, because this execution of warchest was planned for since last year. And I am feeling extremely good now, and definitely not losing any sleep despite the sea of red in my portfolio. See below two of my articles lately.

2003 SARS
My first career crisis was 2003 SARs where I had a hard time looking for my first CPF paying job. You can refer to my article “My First Paycheck 11 Years ago compare to Fresh Graduate Salary Today”. Imagine if I graduated during better times and can be choosy and negotiate a higher salary. Is it really good? Not that I think of. Instead I am extremely grateful to graduate in a time of crisis. This is because otherwise, I will not have learn how NOT to take for granted of having a job.

2009 GFC
Next was 2009 GFC. My company announced layoffs and shutting of plant. Contracts signed were either cancelled or postponed.  I survived and was not on the axe list. One reason is maybe due to my sales role, which is deem important during crisis. To create value in spite of the slowed order intake, I turned my attention to existing projects negotiating favourable postponement deals with clients, and also look into how we can swop the components/equipment for the postponed or cancelled projects for new upcoming projects at a good price for other clients. My company survived the crisis and later go on to do well due to the oil price rebound. Contrary to common beliefs that I can be retrenched or have my pay deducted during GFC, instead, I received one of the biggest promotions in my career within less than a year after the crisis outbreak.

Oil Crisis now
Now, the Oil crisis – the industry I worked in! Friends and colleagues were already retrenched. Refer to my earlier article “Retrench during Oil Crisis! Why?” Yes, the industry is really bad, but I am seeing some positive reassurances for my company. For instance, our core business is not in O&G, and that sector is doing really well since the start of the year. Also, we had been prudent in the last five years, where we build up a rocked solid balance sheet.

Personally, last year, I had anticipated the “worst to come” and took on bigger work scope despite no pay increment. Refer to my earlier article “Oil & Gas Crisis – Time to Take On More Work Even with No Pay Raise!” As projects get lesser, I had also spent considerable time focused on building internal relationships and more importantly the few meetings/dinners with the higher management were really good. Currently, I am working on internal business initiative to optimise cost of our product, and it is keeping me really busy.

Many people do not understand the O&G industry. They thought it is all about Rigs (Keppel or Sembawang) or Offshore Support Vessels where most of the Singapore listed O&G companies are in. It is not the case; there are still the production side of the business such as FPSO/FSO and installation / subsea side of the business who still require work to be done. We are also involved in that side of the business. Ok… it is still bad, but at least there are some leads! You can also refer to this article to know more “O&M Companies – If No Rig or OSV Orders, Then What? Specialized Vessels?”

Overall, despite the downturn, I am seeing quite a lot of opportunities during this crisis for myself. Apparently and counter-intuitively, the start of 2016 has been one of the busiest starts of the year for me. Nonetheless, I am not saying that the “brutal axe” will not unexpectedly happen to me. The point is even if it happens; I will be mentally and financially prepared. Now, I am just cautiously optimistic.

Aside from macro-economic driven crisis, there are also self-inflicted career crisis, such as making wrong decisions in jumping into a wrong company at a wrong time. Many years ago, being young, ambitious, and sometimes ignorant, I yearn for even faster success. While doing very well in the then existing company, I leapfrogged to another company with a bigger role sitting at the top of the organization chart. Not knowing exactly the pitfalls, the scale to peak, took a tumble eventually. It was a failure and it seems to be a bad decision then.

Yet, looking back today, it was one of the best things that happened, not because I learn a lot in work. But even more important, it was a turning point for me, as I took time to reflect on what went wrong then, and vow not to repeat the same mistake again. In addition, I learnt that a single tap of income is not sufficient and job is never stable, no matter how stable it looks on the surface. Also, career, money and power are not the most important things in our life.

Humble family
As a boy, my family struggled to make our means. Being poor back then taught me a lot on the “value of money”.  It also motivated me to study and work harder in order to earn a better living. This is when I started to learn how to earn at a young age, such as selling stuffs, part time job, giving tuition etc. You can refer to my personal finance story as follows.

Gambling
In Part 1 of my Personal Finance Story, and also here, I mentioned how I was addicted to soccer betting at age 20, and eventually suffered a substantial loss of all my savings during my army days. No doubt the loss was painful, but till this day, it serves as my best reminder not to “gamble big” ever. PS: I do not consider my stock investments as gambling!

Graduation debt woes
In Part 2 of my Personal Finance Story, I mentioned how I chalked up debts of $40k (incl. interest) prior to graduation - tuition fee loan, study loan, computer loan. Well, these loans may seem reasonable. Firstly, I do not have any family financial support and secondly, I had a girlfriend who depended a lot on me financially back then. Having said so, I was actually having a relatively good part-time income from tuition at that time, which some of the debts can be pared down if not my overspending.  Today, I learn never to be overleveraged. But that is not to say that debt is bad, for a good debt can work in your favour if you know how to use it correctly.

I had taken few rough rides in my relationships. Each time, I become emotionally stronger and learn to handle it better than before, albeit not perfect! I also learn that while “breakups” can be extremely heartbreaking, it is sometimes necessary, so that we can move on in our life.

From young age, I never considered myself someone who was blessed with good health. And yet, I also never really take care of my health back then, often eating unhealthy food, smoke, drink alcohol and have late night sleeps. When I was thirty years of age, a near-death incident with weeks of hospitalisation taught me to treasure my health and love ones more. It also changed my mind-set about life to be more humble. It comes at exactly the right time in my life when I am getting too arrogant from an exponentially growing career.

So today, when someone asks me to describe my highest point of my life, I will like to say something that Ray Dalio has similarly said before too:

“The highest point of my life should be when I experienced the lowest point of my life. It is at the low point where I can experience a crisis and makes mistakes. Mistakes is good because it produces pain, and because of that, I will learn and remember the most, which will then make me improve and becoming better next time.”  - Rolf Suey

Be it in life or investment – Just "know and understand" is NOT good enough!
My "VALUE?" stocks keep plunging. What should I do?
Bought DBS and OCBC today! How I hedge my bets!
My Major Stock Portfolio Selloffs in 2015 - I use more "Gut" than "Logic"!
Is this a right time to buy: DBS, OCBC, UOB or Keppel and Sembcorp?