Goldman Sachs predicted that a glut of oil supply will keep oil price low for the next 15 years and possibility of testing the bottom at $20 a barrel. Goldman’s long-term forecast for crude is at $50 a barrel.

Counter-intuitively, Energy mogul 87-year-old billionaire T. Boone Pickens said few months ago that oil will be back into the $70 range by the end of the year.

"We thought we had seen the bottom and we didn't, and the reason why I think I missed is because the decline in production when the rigs shut down was not as severe as I thought it would be," Pickens said on a bloomberg program. "Yes, we're coming down, and in another six months we will be down at least another half-million barrels." 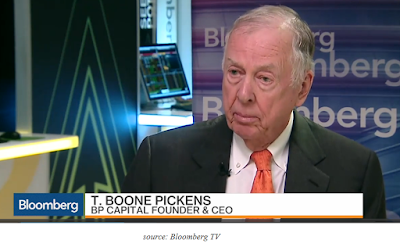 Although Pickens prediction is incorrect having seen oil dip further down now, he added that his estimate is going to be only 6 months off based on his interview in Nov this year.

He believed that supply will go down soonest and drive prices back up again.

The most recent is early this month when Pickens was in a TV program with Carl Icahn. Both think oil will go up. Icahn is more prudent and does not want to put a time on it. Pickens is bold to predict oil price will rebound to $70 within six-month time.

What do you think and what will you do?

Which Directions Will Oil Price Head? What Should I Do Now?
Keppel Corp – How Much Do You Know About Her O&M Businesses?
Oil Crisis – Did You See it Coming?
Mark Mobius on Oil Stocks and Dangers for Long-Term Investors
Oil Price Slump – My Portfolio, What Approach & What Lessons Learnt