The 5 stages of an empire - Ray Dalio

I have been reading Ray Dalio’s Economic Principles that can be downloaded from the internet. I came across this interesting topic on the different stages of countries evolvement. So I thought it is good to share. According to Dalio, there are 5 stages of economic conditions throughout the lifecycle of a typical empire.

1) countries are poor and think that they are poor

Countries are poor with very low income. They have no savings and no debts to speak of. These countries are basically low cost producers that produce low value added goods. This will attract big foreign investments to tap on its highly cost effective production, even in the face of a risky political situation. The currency and capital market is undeveloped. Country will peg exchange rate to gold or some other currency (e.g. USD). It is also the time where they build up their foreign reserves. They are also known as early stage of emerging countries.

2) countries are rich but still think they are poor

The same people in these countries that went through the first stage, started to become rich. They still remember how they were grown up poor and are very financially cautious. The people continue to work hard, driving the export. They continue to save a lot and normally invest in houses, almost risk-free bonds of the country, gold etc. Productivity rise, so is income. Inflation is not a problem and debt is well contained. This is a healthy period.

However eventually debt rise faster than income and income rise faster than productivity, the country starts to experience inflation. With currency pegged to the reserve currency countries, the fate of the country's economy is also dependent on the reserve countries. If the reserve countries have slower growth, which is usually the case, they will require decreasing interest rates to spur the economy. The emerging countries will then also have an interest rate environment that will be too low relative to nominal growth. This in turn will lead to credit growth and upward inflationary bubbles.

There will also be balance of payment surplus. To curb inflation, government will then abandon peg and appreciate currency to balance their trade. Domestic capital market becomes widely accepted with domestic investors participating in this boom as well. If a big country that is going through this “late stage of emerging-countries”, they will develop into a great world power.

3) countries are rich and think of themselves as rich

In this stage, per capita income rise to near world’s highest because of the countries’ prior investments in infrastructure, capital goods and R&D are all paying off. Being rich, there are more spending on "wants" than "needs". A psychological change takes place. People are becoming richer and they wanted to savor their fruits. They no longer work as hard and call for more work life balances and the younger yearn for early retirement.

They become great importer and have high foreign investments in developing countries. Their capital market achieve ‘blue-chip” status and has high returns. Focus is on the development of their capital markets rather than actual productivity of the countries.

Countries that are large and in this stage almost always become world economic and military powers. They are aka early stage developed countries.

4) countries become poorer and still think of themselves as rich

At this stage, debts rise much higher than income – leveraging up! The older generation who went through the earlier emerging stages is either retired or no longer around.  The new generation while earn a lot, also spend a lot. Their income grow, so are debt at a higher pace, while savings fall.  As credit loosens, the spending of the entire economy is so strong that they appear rich, even when their balance sheets deteriorate.

The low levels of investments in infrastructure, capital goods and R&D also mean productivity gains lessen. The balance of payment deteriorates and the country lost its competitiveness. Rather than cutting deficits, they continue to think that they are rich because of their reputation. Countries also typically spend a lot on military at this stage and sometimes go to war to protect their global interests. This will result in government deficits. So the country will experience twin deficits in 1) BOP and 2) government deficits.

As debts rise to purchase goods, services and investment assets, Bubbles take place. People led by policy maker still think like before and think more good times ahead. They continue to bet heavily on trends rising, and thought their investments are great and borrow more money to drive them up higher. Asset value rise, people appear even richer and spending, nominal income continue rising. Borrowing capacity increase and the leverage up spiral goes up until the bubble eventually burst.

The economy decline and this is known as the late stage of developed countries. 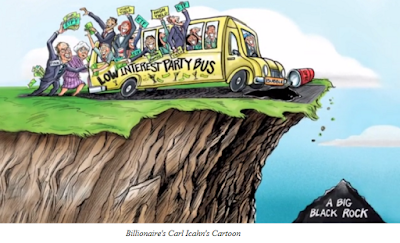 5) deleveraging and relative decline, which they are slow to accept

When the bubbles burst, private debts skyrocketed. Private sector spending fall so is asset value and net worth. Corporations and people becomes less creditworthiness. This will resulted in less borrowing, and hence even lower spending. The negative cycle self-reinforces and spiral down rapidly. Demand for their currency weakens and hence depreciates.

Given the low interest rate environment, weak currencies, huge debts and poor performing equity assets, these countries faces a serious decline. In order to compete with the less expensive countries, their currencies have to depreciate and they like it! So this stage signals the decline of a world power.

Maybe this provides a rough idea of where each economies are heading next!