More than a week ago, I wrote about Raffles Medical Group from the viewpoint of a “Patient” why it is great. Today I will highlight why the company is great from the viewpoint of an “Investor”.
To quickly recap, Raffles Medical Group (SGX: R01) “RMG” is a healthcare service provider with mainly hospital and healthcare services. Hospital services include Raffles Hospital in Singapore which contributes 63% of total revenue. Healthcare Services comprise of 78 clinics in Singapore and 4 medical centres in Hong Kong and Shanghai. Together with healthcare insurance, nutritional supplements and diagnostic equipment, this segment accounts for 34% of total revenue.

RMG is one of the darlings in the stock market this year. The company share price escalated 29% to S$4.00 since the start of the year. In contrast STI increase was approx. 5% year to date. 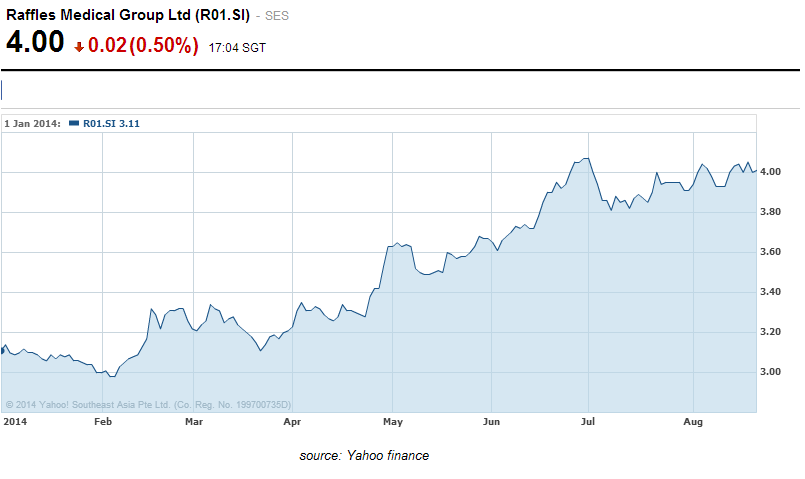 It is not difficult to understand reasons for the surge of share price. In the last five years, RMG had managed to increase its earnings quite remarkably. Revenue and net profits increase steadily yoy at an astounding average yearly rate of 31% and 45% respectively. Earnings per share soared more than twice from 7.22 Sc to 15.24Sc. NAV also increase significantly from 48Sc to 85Sc 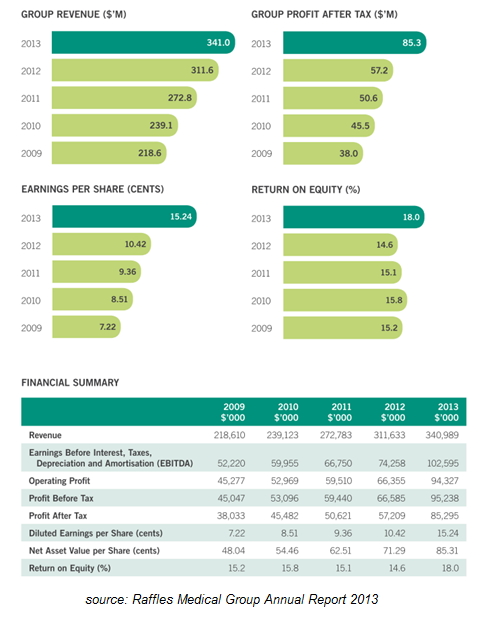 The year ahead seems optimistic thanks to additional growth from opening of new medical centres. Within core central regions, the group opened a brand new comprehensive medical centre at Marina Bay Financial Centres, which will be offering a wide range of services to patients within the downtown business hub. Outside core central regions, RMG added dental facilities at White Sands, Bedok Mall and Jurong Point. It also opened a new Yew Tee Point clinic in January 2014 to cater to a new population region in Singapore.

Raffles Hospital also saw the addition of state-of-the-art medical technology recently with the introduction of its new nuclear medicine centre on 21 July 2014 to enhance the hospital’s cancer diagnostics and treatment capability and concurrently increase its capacity for advanced imaging modalities.

Last year, RMG announced plans to open hospitals in Shanghai and Shenzhen in Feb and Sep respectively. There were no news since then, but if these negotiations are successful, it will allow RMG to expand its operations overseas and diversify its geographical client base.

With an extensive network of clinics in Singapore as well as a hospital, RMG is expected to benefit from the Community Healthcare Assist Scheme (CHAS) and Medisave alterations announced/implemented by Singapore government.

Moving forward, the most promising engines of growth should be:

1) Extension of Raffles Hospital which could potentially add 220k sqft to the existing 300k sqft of gross floor area for the hospital. The total development cost, including the purchase price of the adjacent site, construction costs and improvement works to the existing hospital, is estimated to be approx. S$310m in addition to the S$105m purchase consideration.

2) The construction of a 5-storey commercial building in Holland Village, having 65,000sqft of gross floor area with medical, banking (DBS), retail, food and beverage services. The construction started April this year. It is estimated that the cost of redevelopment, including construction costs, development premium, stamp duty, property tax and interest expenses, will amount to approx. S$65m in addition to the S$55m purchase consideration.
Both developments are expected to be completed sometime in 2016. 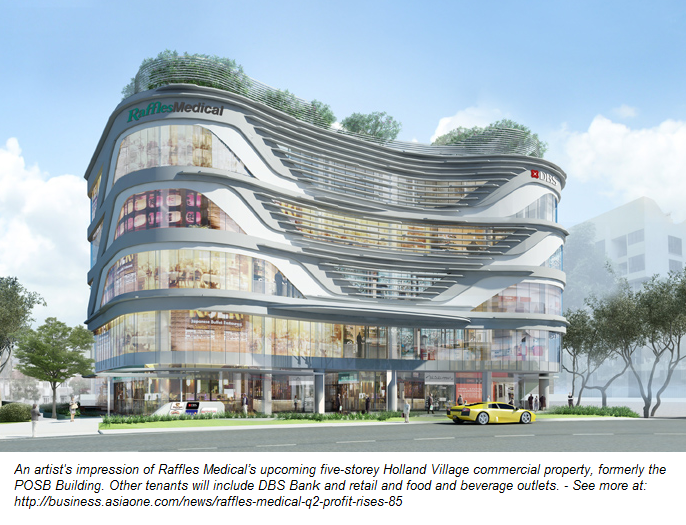 Just when everything appears extremely bright for the company, there are always two sides of a story.

Competitions
As much as RMG has anticipated possible increased demand of healthcare services in the face of Singapore aging population, its competitors had all geared up too. Many hospitals and medical centres, both private and public, will be rolled out from now till 2020. Eminent threat should arise from the higher subsidies from government and rising cost of living prompting Singaporeans to switch from private to public healthcare services. Moreover a portion of RMG clients from Indonesia will be deterred from crossing the border to seek for healthcare services due to the depreciation of their currency.

Here’s more from Maybank Kim Eng on the list of upcoming hospitals/medical centres:

Official data shows the rapid rollout of new private and public hospital beds in 2014-20, after the completion of the 220-bed Farrer Park Hospital this year and five new public hospitals. In addition, a slew of private medical suites will be completed in the next few years. They are currently being marketed. Other than Connexion, which we have been flagging, at least three other integrated developments housing medical suites are being built. These are Farrer Square (42 strata units) next to Connexion at Farrer Park, Royal Square in Novena (171 strata units), Vision Exchange in Jurong East (53 strata units) and Mediplex@SBF Centre (48 strata units).

Please also refer to “Straits Times Feb14 News here” for a list of new hospitals in the pipelines. In particular Ng Teng Fong General Hospital at Jurong reported this month that it is facing delay of six months in its opening to mid next year.

Leverage
Without doubt, the two development projects at North Bridge Road and Holland Village could potentially boost revenue once completed. However the total cash outflow for the capital investments is about S$535m for two years. Having already paid S$190m and currently holding S$130m cash, there is still a shortfall of S$200m and more. Without any direct injection of funds, RMG may resort to borrowing money to pay for it all. Similarly any new hospital expansion overseas (China) in the short term will also require leverage in a rising interest rate environment.

Succession
Since inception, RMG leader, Dr Loo has been instrumental in the company success. Dr Loo is already in his mid-sixties and the need the right successor can be critical.

At its current price of S$4.00, RMG price to earnings ratio is valuated at 25 times trailing earnings which is not at all cheap. Then again in the long run, the overall demand for healthcare services in Singapore is still bright in the face of an ageing population.

Related Post:
Why is Raffles Medical Great? – A tale of personal experience!