I met a friend for lunch this week. He works in a company that supplies equipment to Liftboats. During the conversation, he mentioned the growing number of inquiries of Liftboats lately.

Is Liftboats leading the pack in the Offshore Oil and Gas industry?

Before we examine the demand and supply dynamics of Liftboats, we must first understand the energy outlook within the South East Asia (SEA).
Energy Outlook for South East Asia

Below is an energy landscape of oil and gas countries in SEA. Indonesia, Malaysia and Brunei lead the oil and gas production in SEA while potential growth lies in countries such as Vietnam and Myanmar. 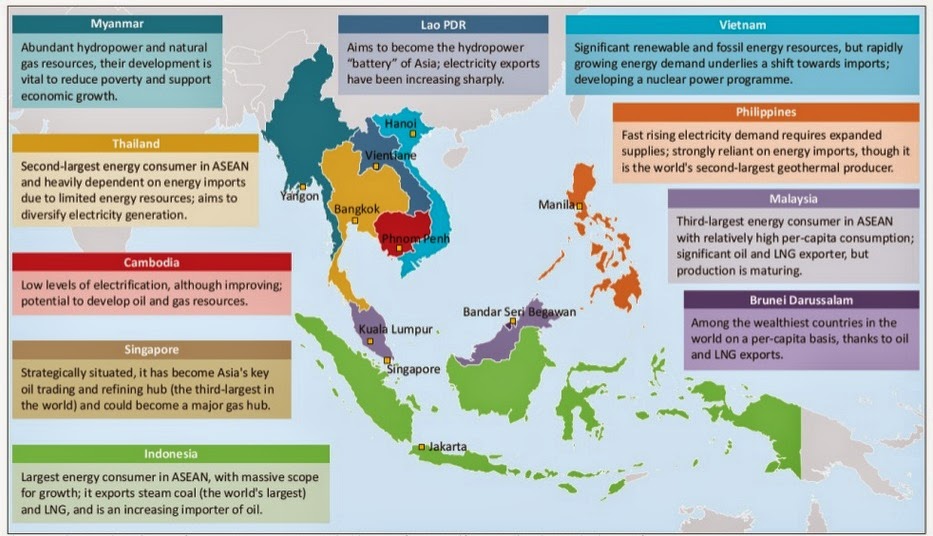 Rising Energy Consumption
Over the years, SEA had a growing thirst of energy due to sustained economical and social development. Although SEA has rich resources of energy, many countries are relying on imports due to the supply of energy unable to catch up with rapidly rising demand. Indonesia and Malaysia are the two largest oil and gas exporter in SEA. Since financial crisis in 1998, Indonesia had under-invest in its oil and gas exploration. Major oil and gas fields are drying up and are not replaced by new ones, due to a lack of exploration. Similarly, Malaysia has seen consumption grow while production has been falling over the past decade. This leaves smaller volumes of oil available for exports. Petronas had promised to ramped up its capex to minimum RM300b from 2011 to 2015.

Below is a chart from IEA showing ASEAN growing demand of energy. 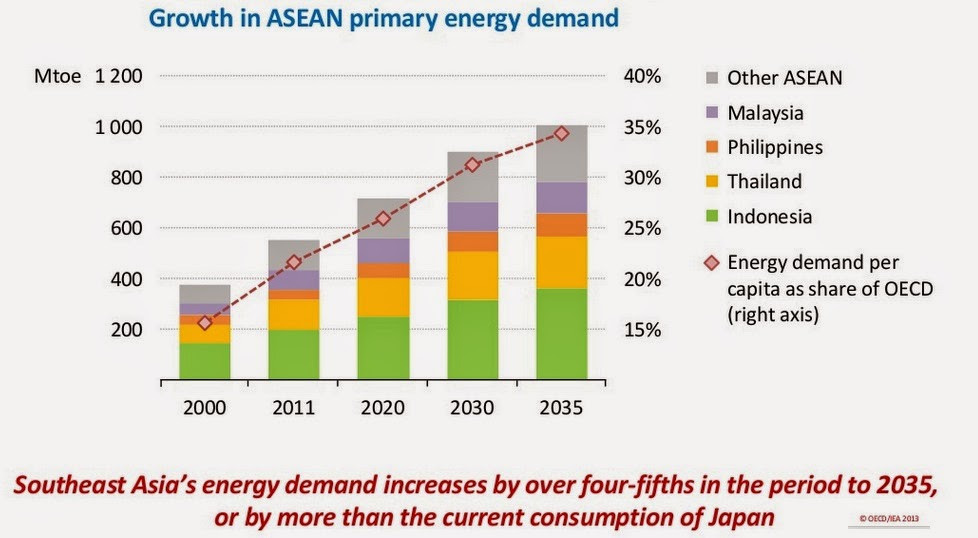 Maturing Oil Fields
The decline in energy production in SEA aside from rising consumption is a result of large numbers of maturing fields, particular the ones in shallow waters. Many oil platforms are already old and required maintenance/upgrade such as replacement of tubings, valves, pumps that may be malfunctioned. Some very old platforms are also required to be removed, while new ones are to added. Liftboats are built specifically for this purpose.

A liftboat is a self-elevating, self-propelled (maneuvering capabilities) vessel equipped with at least one crane and with open deck space that can be used for support of various offshore activities. Liftboats are commonly used to perform maintenance on oil and gas well platforms, normally for shallow water field services.  Its applications include:
Jack up Drilling Rigs that Keppel and Sembmarine build differs from Liftboats, in that they posses drilling capabilities and without self-propulsion.

Ezion is one of the largest Liftboats owner in the world and listed in SGX. The company is a direct beneficiary from the increasing demand of SEUs that seen its earnings exploded from S$13mil in 2009 to S$160mil in 2013. Share price had also rose from 0.09c in 2009 to S$2.20 today achieving a market cap of S$2.6bil.

Aside from the Singapore players mentioned, currently almost all major liftboat players are from USA except for Gulf Marine Services base in Middle East. 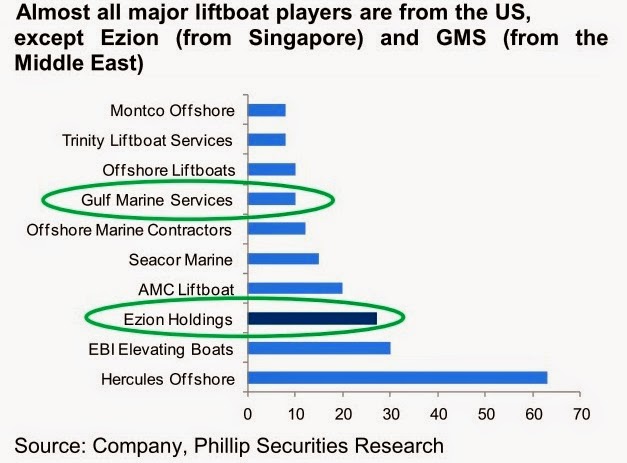 The SEUs owned by Ezion and EMAS are almost all constructed in Triyards, although Ezion has awarded its first Chinese yard order Mar this year. Triyards also have their own design of SEUs, BH450 series proprietary-designed 450ft (approx 130m) leg length SEUs. The BH450 is reported to be the world largest Liftboat to be delivered by End 2Q2014. As of end 2013, Triyards had delivered 6 SEUs with a backlog of 3-4 SEUs. Lamprell based in UAE is the biggest contributors in Middle East.

Niche
It is very niche in its operation particularly for maintenance of platforms. The concept of liftboat servicing platform is uncommon in the past.

Before, it is more common to use jack up drill rigs, derrick barges or workboats to service the platforms. These vessels are often multi-purpose with other functionality such as drilling, pipelaying, construction or other activities.

Due to rising numbers of old platforms in recent years, it is more efficient to utilise a dedicated vessel to perform the dedicated work of maintenance, upgrading or removing of platforms. Liftboats is effectively a low-cost alternative for a wide array of offshore jobs– construction, work-over, maintenance and platform removals.

No mobilisation cost
For example, a jack up and tender assist drilling barge is normally built together with drilling capability. It will be very expensive to charter them for service of platforms compared to a liftboat. Moreover jack up rigs and derrick barges are not self-propelled and required mobilisation services of towing and mooring from offshore support vessels such as AHTS and Tug boats. This will mean additional charter charges.

Safer to work in harsh weather
Then you may consider a workboat that is self-propelled with a large capacity crane. However a workboat is without the Jack up legs and cannot be too close to the platforms since it require mooring services. Also during bad wave condition, a workboat has to stop working because of stability issue due to the wave movement. In contrast, liftboat is more stable even during adverse weather conditions. It can jack itself above the maximum wave height and continue to perform its work unaffected even up to water depths of 220 feet. 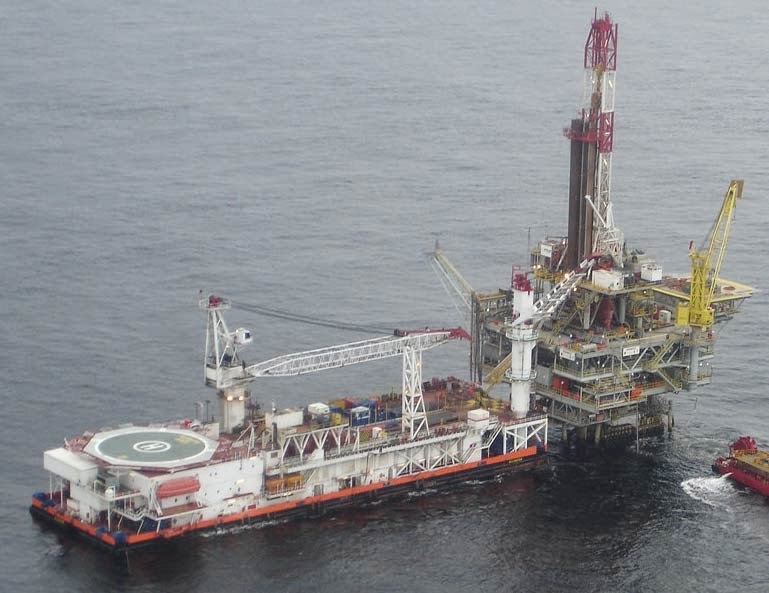 Above is an example of a tender assist drilling barge working alongside a fix platform, subject to weather conditions and requires towing and mooring assist services from OSV. On the contrary, a Liftboat shown below is jacked up and stable, unaffected by the wave or weather conditions. 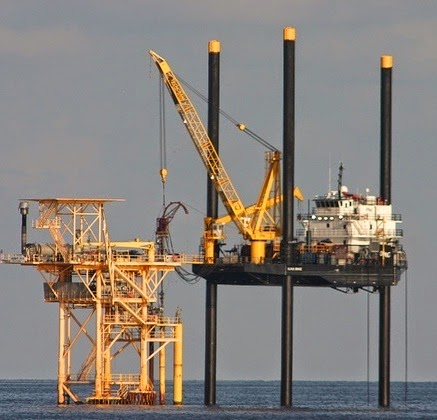 Price and Profitability of LiftBoats

From Triyards presentation, indicative price of each Liftboat that Ezion owns is approx. US$55-60mil. A typical standard B class design Keppel Fels 300-350ft Jack up will cost US$180-220mil.  A drilling Tender Barge owned by SapuraKencana will cost US$130mil.

Charter Day Rate for a jack up and tender barge is typically between US$100k to 160k while Day Rate for Liftboat is range between US$40-60k per day, making it more competitive.

Example
PEMEX of Mexico award Ezion a US$150mil for a 7 years bareboat charter of a liftboat.

This means Annual revenue = 21.4m (150/7). Assume cost of Liftboat = 55m. Opex = 0 insignificant due to bareboat charter. Taking into account other cost in project such as manpower, maintenance, survey work, total cost can add up to approx. 30% or more on top of building cost. This work out to be Total Capex = approx. 77m (p.a. = 11m).

Market outside America regions are relatively unpenetrated.
It is quite obvious that demand is still robust. The niche in the SEU field will also benefit companies like Ezion, Ezra, Swissco and Triyards who is already in the business well ahead. The investment in Ezion (over US$100MM) by Tan Sri Quek Leng Chan (Chairman and CEO of Hong Leong Company) few months back, further reinforced this view.

Nonetheless, Oil and Gas is a sector that exhibits "high risk high return" trait. The high capex model of Liftboat leading to high leverage can be potentially dangerous if economy took a turn such as the financial crisis in 2008. Due to high return in the sector, it will potentially attracts more competition not only from current liftboat owners but also newcomers driving charter rates down. There will also be risk of delay in its building timeliness, especially when Ezion already start awarding order to Chinese yard.

Specifically for Ezion, it had already grown incredibly to billions of market cap within the short last few years. Having on of the largest fleets and high leverage will also mean rigidness when things goes wrong. Personally, I prefer smaller company like Swissco or even Triyards who I reckon have more growth potential with much lower PE and PB ratios.

Thank you for reading this article. I will end with an animation of a Liftboat in operation.

Singapore Oil and Gas Stocks -Win-Win Network for the Rich